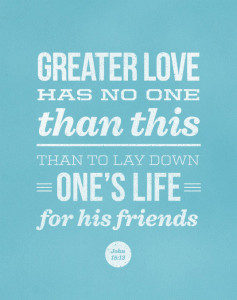 I’d like you to meet my friend.  He is strong and manly, friendly and sociable, attractive and magnetic.  He stands out in any crowd.  He is fearless and firm, but little children and strong men are drawn to him.

He is a perfect example of gentleness and kindness, of humility and courtesy; but his whole being reacts with severity against injustice, hypocrisy, and irreverence.

He seems to understand people and is especially considerate of the poor, the lonely, the sick, the forgotten – even the ugly and disreputable.

In fact, he seems to see some good in everyone.

He shuns no one, looks down on no one, seems to believe that every person in all the world has infinite worth in the sight of God.  And somehow the lowest and the worst feel this way, too, when they look into his face.

You always feel safe with this friend of mine, sufficient for whatever comes. You feel that he understands, that he believes in you.  You’d rather have his friendship than anything on earth.  You desire his approval more than anything the world can give.

This friend of mine has come to mean a lot to me.

He has promised that he will never leave me.  There have been many times when I have failed to be loyal to him, but his faith in me has never weakened.  He has been marvelously forgiving.  This has always inspired me to strive harder to measure up to his expectations.

The wonder and power of his love have been a purifying force in my soul.  Somehow, I’ve felt his goodness and strength poured into my being.  His very life has become my life.  Since I came to know him, I have been different.

I learned about God from him.  He knows God in the most intimate sort of way, like a son knows his father when the two have but one common purpose.

He made God real and near.  In fact, God is so much a part of him that I became a friend of God, and more – a true child of God.

I owe everything to him.  He showed me the meaning of life.  He made me want to be good.  He fired my soul with high purpose.  He gives me strength to overcome evil.  He has taught me that, no matter what comes, I can depend on God as my Heavenly Father.  This friend has shown me that love never fails.  His friendship is the explanation of every good thing in my life.

My friend has unlimited capacity for friendship. He is the friend of many, many people who feel toward him as I do.  Their lives have been changed by his friendship.

Some of them are changing the world’s history.  They are creative forces in building a worldwide fellowship of love.  They have gone literally around the world to tell people of all races and nations that this friend can help them find God.  They have shed blood, sweat, and tears in order to do this.  Some have been imprisoned, banished, and killed because they dared to do his will.

This friend of mine, you see, is both loved and hated.  Millions of people refuse his friendship.  I wonder why. Can it be that they don’t really understand who he is?

That, surely, is why men killed him.  He had done no wrong.  His only offense was to be incarnate truth, purity, and love.  But they put him to death.

There is a book that tells about this friend of mine.  I like to read it more than any other book.  Every time I read it, I learn more and more about him.

The book radiates his presence. You feel his heartbeat in it. It tells of his magnetic power to draw all men into his circle of friendship and of his purpose to make peace reign in all the earth.

This friend of mine would change the world if only men would follow his way of truth and love.

When I think of this friend, I wish that every person on earth could know him.

I believe, if I could help you to know him, that you, too, would want his friendship above everything else, and count it life’s highest joy to serve him.

He will not force his friendship on you.  But if you will accept him as your dearest friend in wholehearted committal, he will go with you to the end of life’s way.

His friendship will provide the resources for noble and victorious living.

He will turn emptiness into fullness, fear into courage, weakness into strength, heartache into joy, turmoil into peace, dullness into radiance, and death into life.

I’d like so much for you to meet my Friend.

His name is Jesus.